Since 2004, Arend Groosman has been developing his very own spatial transformable world, by researching and designing construction systems that can be used to build a wide range of applications. With his present project, which is called 24mm, Arend has come up with his ultimate multi-functional construction system.

Lamps, furniture, spatial constructions and even whole spaces can be built with this one-of-a-kind system. The name of the system is derived from the unit that is used to measure the beams with which the system is constructed. 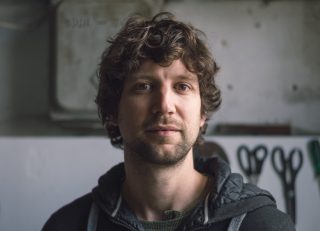 Arend Groosman (1983) has always been interested in systems, shapes and architecture. Experimenting with different shapes and materials in his search of new systems constitutes the main theme throughout his work. Sustainability and transformation are important incentives to generate new insights. Usually his projects have a playful undertone, but the artist also often refers to certain unease in our dynamic and quickly changing society. Part of his work, therefore, is dedicated to finding a way out of this society. In this process the utopian ideal itself is more important than actually reaching this goal. With this ideal as basic principle, transformable and mobile projects are created which together form an independent, constantly changing and growing universe. From construction and experimental shapes to spatial installation and from utensils to furniture, all of these are part of Arend Groosman transformable reality.

After a period of experimentation and long term research into the workings of different systems. I developed a system that makes it possible to experiment and realize my designs in a fast and efficiënt way. This quest has resulted in the creation of my ultimate construction system: 24mm. 24mm is a modular system which makes it possible to build constructions that are utilizable in many different ways: experimental, architectural or interior objects, sculptures, but also spatial constructions. An important guideline while developing my system has been my search into transformable, mobile architecture. Because the objects made with the 24mm system can be assembled and disassembled again, it is possible to create objects rapidly and quickly carry out new ideas. In this way objects can be constantly changed or merged, the material is easily reusable and everything can be transported efficiently. By using a combination of both the functional and the playful, I want to refer to a future in which our world is constantly adapting to the imagination.